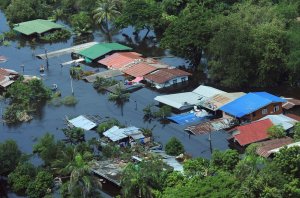 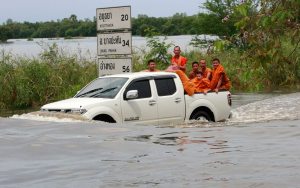 Yesterday was the last day of this weekend’s high tide and our district has been dry throughout.  Authorities said the high tide was lower than expected (!) which prevented a major overflow in Bangkok. But after half a day of elation, disturbing news emerged. Residents in some flooded communities were fed up with having to be “sacrificed” just so central Bangkok could be spared. So angry groups pulled 10 meters of sandbag dykes down to free the waters from their roads to flow into other canals, causing other flood-free communities “to share” the flooding.  An angry mob demanded that a floodgate be opened wider and the PM gave in. This has now put the whole of Bangkok at risk of flooding.

We are on the west side of the River and waters are coming down from 2 provinces directly to our north. It is difficult to know when exactly the waters will come to our district as situations can change very quickly, e.g., people venting their frustration and anger and causing more widespread damage. It is now predicted that the whole of our area will soon be flooded (but we still pray that it won’t enter our house).

We heard some stories that brightened up our days. One church in the New Life Group with which we work, Srinakarin Church (formerly called Bangchak Church), reached out to help the community where  Bangbuatong Church is (we reported last time that this church was already flooded and now all the members’ houses are flooded). The Srinakarin Church cooked food one Sunday afternoon (23 Oct) and distributed 500 food boxes to residents who were stranded in their homes. Government boats and officials failed to go to some communities and these residents had not had food for 3 days already when help from these 2 churches came. These Christians improvised a raft to carry the food boxes and bottled water while they waded in chest-high waters pulling the raft. They want to do this again.

We heard of one church in a province up north, Pitsanulok, which was one of the first provinces affected by the flood in August. The church there is pastored by one of our alumni. He related how many months ago, the church decided to raise funds for water treatment equipment to be used to serve the community when any time of famine and drought comes. They also designated one room in the church to be a storage for dried food like instant noodles, rice, etc. This was months before the present flood crisis came. So when their community went under the floods, the church was able to provide clean drinking water and thousands of packets of noodles to the needy.

It was just decided today that we will go ahead with the opening of the second term on Monday, 7th November. But instead of sitting in class-rooms, the students and faculty will be organized into teams and go out to serve the community. Where possible, some will go by boat to remote areas to distribute food to folk who have been without food for days. Some will help in evacuation centers. As the water recedes some will help in the clean up operations (co-ordinating with local churches in the affected areas). We plan to have the teams operating up until the Christmas break and then start normal classes early January (with a later than usual end to the term). Some students will need to stay in their own flood-affected towns and villages, but we expect to have a workforce of around 100.
* IF THE LORD LEADS YOU TO GIVE to help support these relief efforts then please give through MEANS  (tax deductible in the USA)
https://meansusa.wordpress.com/donat/
Please state it’s for Steve & Flor Taylor  (Recipient Code: R1158). All gifts to us through MEANS received in November and December 2011 will be given directly to this relief effort. We’ll be able to acknowledge any gifts once received.

1. Government – for wisdom from God as to how to speed up the draining of the water into the sea before the next high tide comes (mid-November)
2. Thai churches to rise up and seize this opportunity to serve their neighbours
3. BBS faculty and office staff as we coordinate this relief operation – wisdom from God (e.g. how to teach our students in dealing with hazards like crocodiles and snakes in the water, electrocution, emotionally-loaded situations, etc)
4. BBS students and churches we will affiliate with – for protection, wisdom, spiritual and physical strength
5. For us – The suspense of it all (4th week now) has started to wear us down. But our Lord has wonderfully given us PEACE. We have decided to stay in our house if ever water comes to our neighbourhood. We are taking some measures to protect the car and the inside of our house from flood waters. But please pray it won’t enter!
***Please pray for spiritual and physical stamina for both of us.

Thanking you all for your prayers, 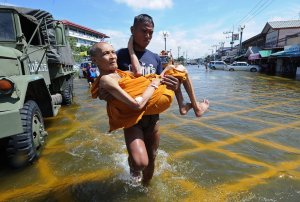